Friends of the River Propose Ordinance to Protect the Lowcountry

The Beaufort County environmental watchdog organization, Friends of the River, is not slowing down for the holidays. Their job as “watchdog” over the many rivers and estuaries to our south is a 24/7/365 commitment.

The organization is proposing to submit a dock ordinance to state and local officials next month that would apply to rivers classified as “Outstanding Resource Waters.” This classification is given by the Department of Health and Environmental Control (DHEC) to waters with “exceptional recreational or ecological importance or of unusual value.”

In Beaufort County there are four rivers classified as Outstanding Resource Waters: the May, Okatie, Colleton and New rivers. The proposed ordinance would limit the number of community docks at new developments, would require all new developments on the rivers to go through an environmental impact study (EIS), and would require any maintenance on current developments and docks to be subject to public review.

This move by the Friends of the River comes after DHEC approved the Pinckney Point development (which consists of 3 community docks, 30 boat lifts and a boat ramp) without hearing any of the 20 appeals made by the public.

DHEC did however scale the proposed development down a bit; the Pinckney development had originally proposed 76 homes and 70 boat lifts. DHEC found that this development would have significant impact on the quality of the waterways and thus found it to violate the Clean Water Act.

Friends of the River are demanding that DHEC do more to protect the health of our Lowcountry waterways.

Although we agree that a community presence on the water is essential to assuring that our waterways are protected, such a high concentration of activity can adversely affect the health of the entire ecological system. In this instance, the proposed development is located at the headwaters of the Okatie and Colleton rivers and thus would influence the health of both rivers in their entirety. 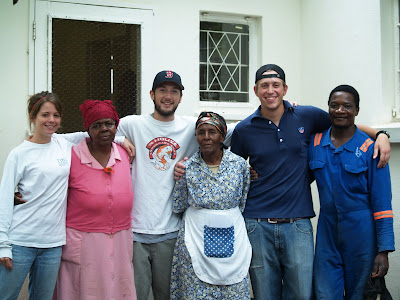 Two years ago I spent seven weeks traveling throughout Zimbabwe with an educational based non-profit organization, the Elias Fund. During my time in this incredible country, I was exposed to many simple habits that to us, might seem extreme or unnecessary, but to the majority of Zimbabweans, these habits are absolutely necessary to survival.

Water, for example, is treated as it should be, as a finite resource essential to life. This perspective is not driven by clever marketing or encouragement from aid organizations, it is on the other hand, motivated by the simple fact that water is scarce and has to be used wisely. Simple acts such as watering crops, washing dishes or bathing are done so in a manner that to us, defines conservation, but in the minds of many, this is merely defined as survival.

Reducing our water usage is often times, in our world of ever-flowing streams and clean tap water, a mere afterthought…something that is lost amongst the misconception that we have at our disposal an infinite amount of clean water. In a country like Zimbabwe, however, and many more nations around the world, these acts of being “green” are not fashionable, nor popular, but instead they are matters of life and death. For without water, life cannot exist, and if you only have so much of it, you better figure out how to make it last.

Unfortunately, the condition of Zimbabwe’s political, social and economic environments have negatively effected the condition and treatment of their most precious resource, water. Since August, 2008 nearly 780 individuals have died from a cholera outbreak, a bacterial infection transmitted through contaminated water. Recent estimates have suggested that this outbreak, caused by an inadequate supply of clean drinking water and poor levels of hygiene, could surpass 60,000 cases.

We must recognize that issues regarding water on a global scale will inevitably influence our way of life; this is not a matter of how, but when. Our thoughts are with our friends in Zimbabwe and the many lives being affected by this outbreak.

As of December 15, 2008 the UN estimates nearly 1,000 Zimbabweans have died as a result of the recent cholera outbreak.

A recent report by USA Today claims that many of Charleston’s schools are ranked in the highest percentiles (which is a bad thing in this case) with respect to exposure to harmful pollutants. “USA Today used an EPA model to track the path of industrial pollution and mapped the locations of almost 128,000 schools to determine the levels of toxic chemicals outside. The potential problems that emerged were widespread, insidious and largely undressed.”

Of the 128,000 schools analyzed, many of those most affected by surrounding pollutants are located in the Charleston area. Here is a list of the top five schools exposed to the most air pollution in Charleston (all of which are in the top 1 or 2 percentile nationally!):

According to the report, schools in the Charleston area are exposed to high amounts of toxic chemicals such as manganese, chromium, nickel, sulfuric acid and copper. The top five contributing sources include:

This study shows that nearly 125 schools in the Charleston area are exposed to these dangerous toxins. To read more, click here.

This could very well be a sign of deeper issues. After all, chemicals, toxins and pollutants that begin as air contamination eventually make their way to the surface of the earth and eventually, into our waterways. This chain of events creates an incredibly tightly woven web that connects and effects everyone and everything, especially our health.

Delfin, one of Russia’s largest enterprises, specializing in the branding, mixing and packing of motor oil, transmission oils and automobile fluids, plans to expand their operations to the United States…North Charleston to be specific.

This Monday (12/08/08), the president of the company toured a 42-acre property on the banks of the Cooper River, which was purchased by the Delfin last year for $20 million. This Virginia Avenue property is projected to receive $55 million worth of improvements when Delfin is done renovating it. Already though, this retired Shell Oil Products plant has “several storage tanks, rail connections, office space and about 257,000 square feet of manufacturing and warehouse space.” (Not to mention a pier that extends 140 feet into the River.)

Delfin explains that the appeal of the Lowcountry was not the beauty nor the abundance of natural resources, but instead it was the advantages of the Cooper River facility, including an on-site shipping terminal. According to a recent article in the Post and Courier, Delfin USA “plans to spend tens of millions of dollars turning a North Charleston industrial terminal into a major oil-mixing and bottling hub.” 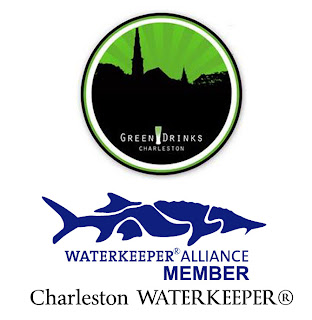 Charleston Waterkeeper has partnered with our friends at Green Drinks Charleston for their 2nd Annual Holiday Party. The event will be held at Yo Burrito in downtown Charleston from 7pm until 11pm. The evening will feature live bluegrass music, a huge raffle featuring prizes from local businesses, beer tasting and opportunities to sign up as members of both organizations. All proceeds will be donated to Charleston Waterkeeper to help with our mission of improving the quality of Charleston’s waterways.

Green Drinks is a dynamic group of individuals and organizations from around the Lowcountry who gather to enjoy cocktails, lively discussions, new friends, guest speakers and good times. Known locally as Charleston’s Green Happy Hour, Green Drinks Charleston is one of over 400 chapters around the world dedicated to bringing people together who are both living and practicing the principles of sustainability and those seeking to learn more.

So come out and kick off the holiday season with us. Don’t forget your business cards (and check books of course!…just kidding…sort of…ok, not really) as there will be plenty of opportunities to network.

This event is FREE and open to the public!