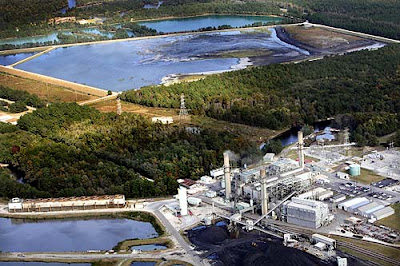 Charleston Waterkeeper isn’t the only watchdog “looking over the Lowcountry.” The Post and Courier, the oldest newspaper in the south, regularly publishes investigative articles exposing issues facing Charleston and the rest of the Lowcountry. This week, The Post and Courier‘s “Watchdog” section dug deep to publish a series of stories on toxic ash.

According to the reports, “every year, South Carolina’s power plants burn enough coal to fill 10 large football stadiums, leaving behind a stadium-size pile of toxic ash. Every year, our power companies dump roughly 2.3 billion pounds of this tainted ash in landfills and holding ponds, many precariously close to rivers and neighborhoods.”

This toxic ash (which has high concentrations of arsenic, selenium, chromium and other elements known to cause cancer and other health problems) that is disposed of through the aforementioned process eventually makes its way through many layers of soil and into nearby groundwater. One study found “arsenic in groundwater flowing into a nearby pond at a rate of 116,000 gallons per day, roughly equivalent to the volume of eight residential swimming pools.”

The majority of these holding ponds and landfills are located in rural parts of South Carolina (map of locations). Most rural areas depend on groundwater as their main source of water and as a result lie victim to the potential contaminants and pollutants that can enter their groundwater supplies. The threat of contamination by toxic ash leaking from nearby landfills and holding ponds is a huge concern for the many individuals that depend on groundwater as their source of water.

Contamination of groundwater can easily affect nearby surface water. For example, “records from [the Department of Health and Environmental Control] show that arsenic contamination has spread from large ash ponds next to SCE&G’s Canadys Station coal-fired power plant into groundwater a few hundred feet from the Edisto River.”