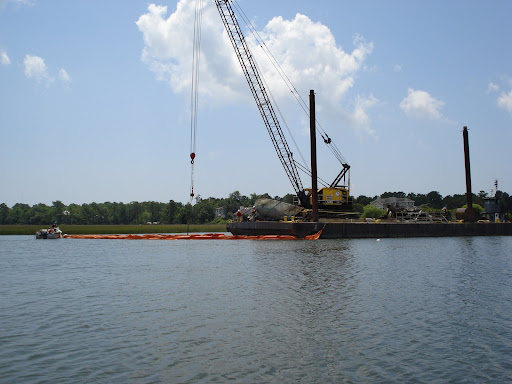 Cape Romain Contractors prepare to remove an abandoned boat off the floor of Hobcaw Creek in Mount Pleasant, SC. Photo by: Cyrus Buffum

In an effort to clean up some of the abandoned boats littering Charleston’s waterways, the town of Mount Pleasant spearheaded the removal of several derelict vessels over the past few days.  Receiving $40,000 in grant money from the Department of Health and Environmental Control and contributing $10,000 of their own, the town contracted the job out to Cape Romain Contractors.

Some of the boats targeted in this cleanup effort have been abandoned for over a decade.  As a result, some have sunk to the pluff mud bottom that lies below.  The delicacy of these boats poses an especially high environmental threat to our waterways.  Rotting hulls, rusting engines and leaking tanks all lead to one thing… pollutants entering out waterways.

Today, while removing the last contracted boat out of Hobcaw Creek, Cape Romain Contractors deployed a boom around the parameter of the removal zone in order to catch and retain any potential contaminants that were released upon removal of the derelict vessel.  When it came time for removal, the vessel did not come up easily; workers had try several attempts before removing the bulk of the rotten boat.   Click here for more pictures from today’s removal.